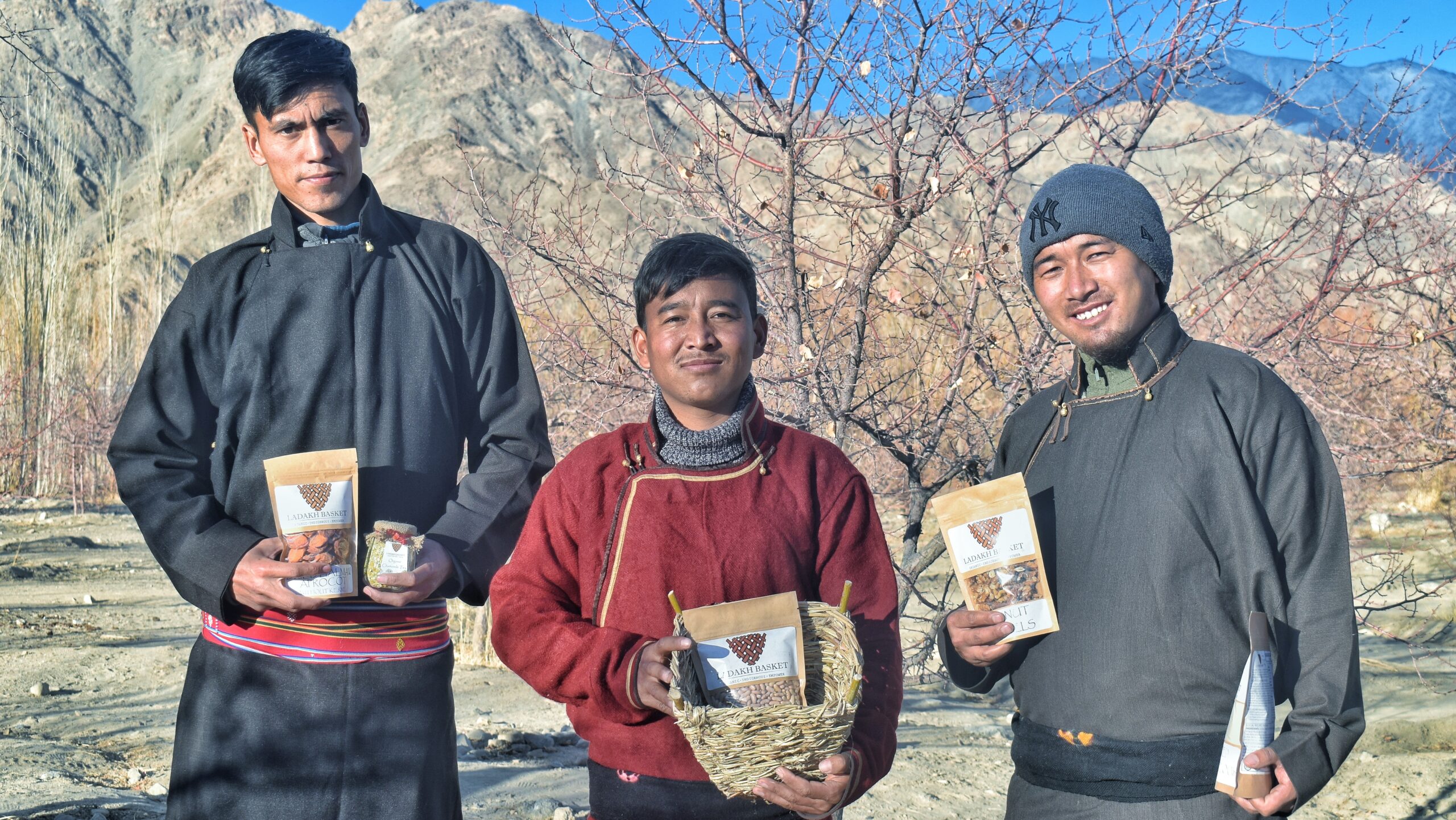 In this series, we introduce you to one of our three founders. Read on for a profile of co-founder and CEO, Stanzin Jorden and why he started Ladakh Basket and what he wants to share with other budding youth entrepreneurs.

Stanzin Jorden has much on his mind these days. Born and raised in Leh, Ladakh, he watched his village’s youth head to bigger cities around India and abroad for jobs and better opportunities. Yet, he valued his heritage and his family’s farming background and was proud of his culture. His grandfather was one of the first to introduce Chamomile cultivation in the valley and now Jorden’s mother grows it.

“One of the most important reasons behind founding Ladakh Basket was to create something back at home so that I can stay back and work in my region,” he said. “It is also because most of the youngsters including me go outside, like to Delhi, to study.”
That Chamomile is one of the things that got Jorden thinking and after a successful mentoring partnership with the UNDP Youth Co:Lab initiative, Ladakh Basket was created as a community-based social enterprise selling organic local and indigenous products from Ladakh. Youth Co:Lab is the largest youth social entrepreneurship movement in Asia and the Pacific. To date, over 8,000 young entrepreneurs have benefited, by developing or improving nearly 1,000 enterprises and startups directly addressing the Sustainable Development Goals (SDGs).

Now, after community partnerships were created to demonstrate and showcase organic villages in the Leh district, Jorden is thinking about resilience, teamwork and leadership.
“I have learnt so many things and I’m still learning a lot,” he says. “It’s been a roller-coaster journey for me.” He says he has had a steep learning curve in agriculture, land use and the farmers and producers themselves. He is pleasantly surprised when locals recognize him and the other founders and the Ladakh Basket products. “It gives me immense happiness and pleasure getting to know new people,” he says, “and being able to create an impact in their lives even if the impact [for now] is small.”
Growing a sustainable community organization that ships organic products all over the world is some of what Jorden’s thinking about, but he’s also been thinking about materialism (he doesn’t want to own too much stuff), his happiness helping others and ahimsa (not harming people and animals).

He admits it’s hard some days with the pressures of making the business succeed and sometimes losing his composure. “But I am an optimist,” he laughs. This also has him pondering mystical questions. “How can I realize my true nature,” he asks, clearly keen to balance both spreadsheets and spirituality.

But he’s not so sure about secret talents. “I don’t think I have one,” he laughs. He’s the CEO of Ladakh Basket because he’s confident in making the sometimes tough decisions. When he reflects on his entrepreneurship journey, one of the first things that come to mind is a line from the movie Spider-Man: “With great power comes great responsibilities.” This quote resonates with Jorden because he has learnt the value and power of leadership, honesty and being of service to others. He also thinks good entrepreneurship means listening, being caring and open to the daily challenges that crop up. “It is a difficult and long journey,” he says, “but a beautiful and fulfilling one.”